To accompany the release of the album, E-40 shares “Wicked,” a minimalist party jam off the new album. With an appearance from Rich Rocka on the hook, “Wicked” finds 40 employing an entrancing stop-start flow, kicking off the song on the perfect note: “Well damn, another muthafuckin’ slappy/Make ya mammy wanna slap ya pappy/Make ya motorcycle pop a wheelie/Figure 8, make ya ’50 do a 360.” In the video, which features a cameo appearance from Nef The Pharaoh, OMB Peezy, and other Bay Area figures, 40 goes dumb in a warehouse, echoing his classic video for “Tell Me When To Go,” while muscle cars do figure 8s and donuts under the Oakland sun.

An unstoppable force in the rap game, E-40 churns out charting albums with remarkable efficiency. Earlier this year, the rapper teamed up with B-Legit, his cousin and with 40, a co-founder of seminal rap group The Click, for Connected & Respected, a full-length collaborative album. Packed with classic Bay Area slappers like the P-Lo-featuring dancefloor jam “BOY,” Connected & Respected is a master-class in rhyming and a treatise to the importance of keeping it in the family. In addition to his prolific musical output and his frequent courtside appearances at Golden State Warriors games, E-40 is an accomplished businessman in the adult beverage industry, hitting it big with his Earl Stevens Selections line of wine, his best-selling mixed cocktail drink Sluricane, and most recently, E. Cuarenta, his new brand of premium tequila. E-40 continues to add to his legacy with The Gift of Gab, with two more albums slated to release before the end of this year. 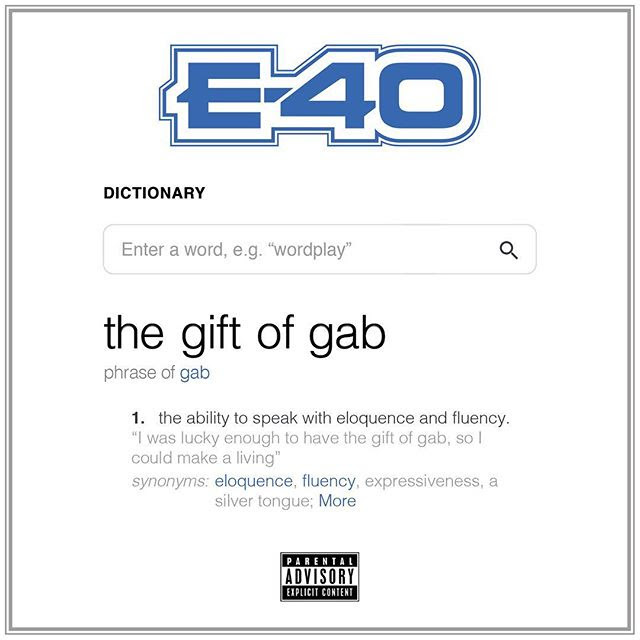