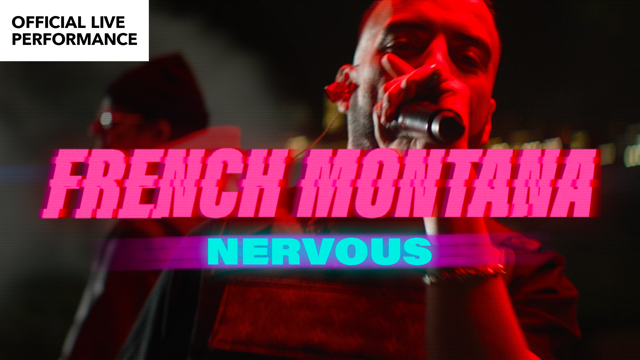 Today, Vevo is excited to debut a Vevo Originals live performance from French Montana and producer Harry Fraud for their collaboration “Nervous”. The song is one of two solo cuts from Montana’s 2018 release with Drake, “No Stylist.” Filmed in South Bronx, Vevo aims to collaborate closely with artists to create a visual that gives fans a unique take on the original songs. Alumni include Alessia Cara, Demi Lovato, Lorde, Khalid and more.

French Montana was born Karim Kharbouch in Morocco, immigrating to the US in his teens. He set up shop in the Bronx and began releasing his Cocaine City series of DVDs in 2002, mixing interviews with established hip-hop artists and unsigned talent. Around 2009 he began releasing his own music, and signed to Akon’s Konvict Musik label that same year. 20 mixtapes and two studio albums later, French Montana is one of the biggest names in music. He has collaborations with Drake, Lil Wayne, Nicki Minaj, Diddy, DJ Khaled, The Weeknd, Rick Ross, Mac Miller, 2Chainz and more under his belt, as well as multiple worldwide tours.

Keep up with exclusive content from artists all over the world on YouTube.com/Vevo.

ABOUT VEVO
Vevo is the world’s leading all-premium music video and entertainment platform. With over 300,000 videos and 25BN views a month globally Vevo connects artists with audiences from all over the world, providing exclusive music content, original programming and official music videos to fans