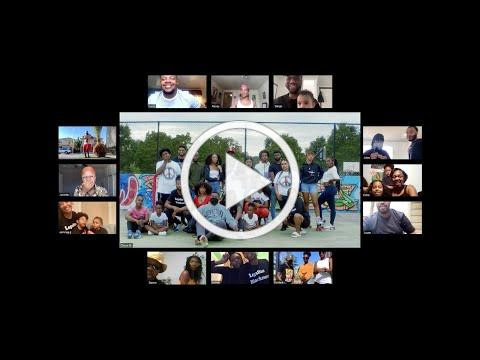 Today, Seattle rapper Dave B releases an uplifting music video entitled “Worthy” that champions the excellence, beauty and joy of black lives. Video director Bailey Williams, a black queer woman from Dave B’s hometown, captures the joy of black pride that spans all ages, shapes, sizes and gender identities. Filmed in Seattle, Dave B is with friends and family as the celebration is intercut with Zoom calls and home clips. “Worthy” is a response to our nationwide protests against police brutality and systemic racism, serving as a bold statement that Black lives are indeed worthy.

“I couldn’t stop smiling,” Dave B says about the video. “Why the f*ck do I have a frog in my throat feeling like I’m about to cry looking at all this Black joy? I cannot wait for people to watch because I want to say to my Black fans… you’re worthy of love, you’re worthy of respect. You’re going to wake up angry and that’s ok, but you’re valued and important.”

ABOUT DAVE B:
Dave B is a multi-talented artist who raps, sings, writes and produces from Seattle, Washington. He was raised singing in gospel choirs and is the son of a preacher. His sound organically blends elements of hip-hop, R&B, jazz and funk with conscious-driven lyrics, soulful melodies and memorable production. His depth and versatility can be attributed to vast musical inspirations: gospel icons Fred Hammond, Kirk Franklin; hip-hop luminaries Andre 3000, Missy Elliott, and Kanye West; R&B songstresses Aaliyah and Erykah Badu; jazz legend Thelonious Monk; and rock god Jimi Hendrix.

Seattle Times calls Dave B “one of Seattle’s brightest hip-hop talents” covering his career since he won first prize at MoPOP’s Sound Off battle of the bands competition at just 18 years old. His debut music release Punch Drunk EP (2015) quickly gained support from tastemaker music sites 2Dopeboyz, who said he is “remarkably exceptional” and DJ Booth, who declared him “revolutionary.” NPR’s First Listen debuted his next project Tomorrow (2016) and critical acclaim poured in from Pigeons & Planes, HotNewHipHop, Okayplayer, XXL, Essence and more. With his latest effort Pearl (2017), Pitchfork says he is “naturally melodic” and Complex adds “he’s a leading voice” for his town.

Dave B’s engaging live performances have led to tour openings for Seattle superstars Macklemore and Ryan Lewis at Seattle biggest music venue the Key Arena along with a direct support on the UK and Australian dates on Macklemore’s Gemini World Tour. Dave has sold-out venues along the West Coast as well as hometown live-music landmarks The Neptune, Neumos and The Showbox.